This intimately sized-city, Crete’s third largest, behind Chania, reaches out into the sea- at the very tip of the cape, you’ll find its signature landmark, the late 16th century Venetian Fortress.

The highlights of Rethymnon Town

Romantic by night and noble by day, the Fortezza sets the tone of the city- historic, atmospheric, and – yes - more than a little romantic. If it puts you in mind of the Renaissance, you might want to come for the Renaissance festival held here every other summer at the Erofyli outdoor theatre. Fortezza also hosts concerts and cultural productions.  Cretan cuisineis celebrated each year the first week in July. And if you are here in the Spring, get ready for a fantastic Carnival festival- Rethymnon has the second largest of Greece.

The Venetian harbor is marked by a splendid Egyptian Lighthouse, Crete’s second largest after that of Chania. It was built in the 1830s, after the Ottomans handed the city over to the Egyptians. The harbor makes a lovely destination between exploring the Fortezza, and continuing into the Old Town- the soul of Rethymnon- where there is plenty more Venetian charm: the Venetians, here from the middle of the 13th century until the middle of the 17th century, when the Ottomans came, have given the heart of the city much of its lasting architectural identity. 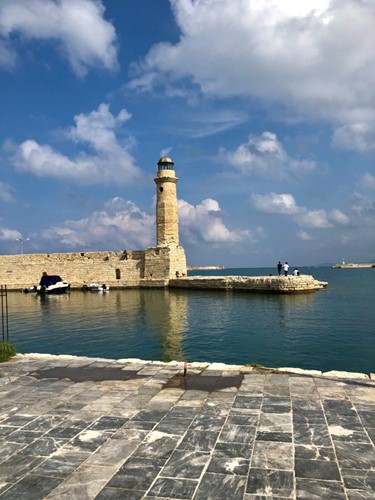 The Guora Gate, named after a Venetian governor, was once the entrance to the city and leads to the central square. Here, in Petichaki Square, you can refresh yourself at the early 17th century Rimondi Fountain. A central feature of Rethymno’s Old Town and a popular meeting point, cool water still flows from the mouths of lions.

The Venetian Loggia, once the gathering place for important political meetings, is nearby.

Off of the western side of the square, Our Lady of the Angels – an elegant name for an elegant church- is beloved for its beautiful bell tower. 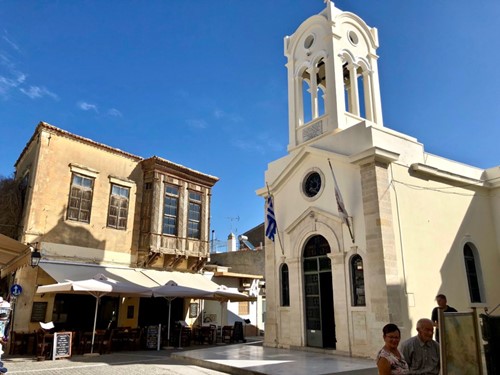 It’s on a street with a charming name- the Makry Steno- the name means the “long-narrow” — where you’ll find more fountains and enchanting doorways. 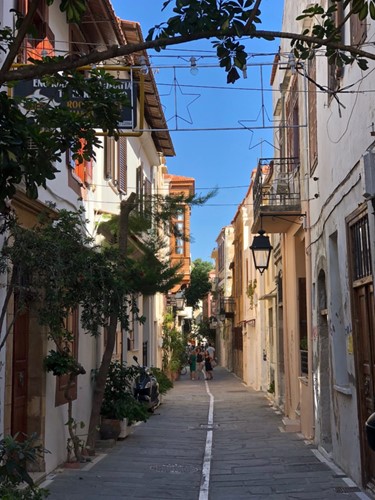 The heritage is not all Venetian: the Ottomans conquered Rethymnon in 1646, calling it “Resmo” in Turkish. Their vernacular architectural heritage is expressed in Turkish houses in the old quarter. Look for a more rustic style than that of the Venetians- rather than golden stone, lots of wood- wooden trim and their cantilevering upper stories- like ornate enclosed balconies with small shuttered windows. 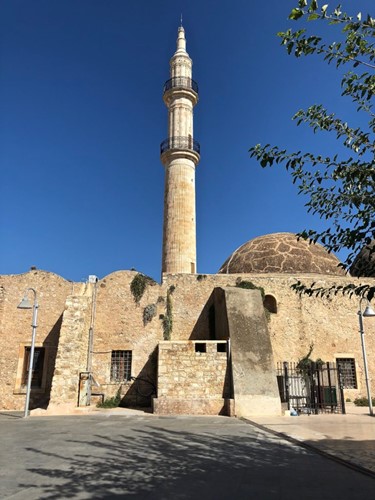 The Ottomans converted the existing Venetian structures for their use, making the Venetian churches into mosques, for example. The Neratze mosque is the most notable of these. Once the main church of an Augustinian monastery, it was converted into a mosque dedicated to conqueror Gaza Hussein Pasha in 1657, shortly after the conquest of the city, when three domes were added as well as its minaret. Another notable conversion is the Sultan Ibrahim Mosque, set in the Fortezza. This was once the church of St. Nicholas, built in the late 16th C, and converted after the conquest.

Two of Rethymno’s historic sites double as museums: the Church of St. Francis is made of beautiful gold stone and has an elaborate entrance with Corinthian columns. Today, it serves as the Archaeological Museum, displaying artifacts from the Neolithic through Roman eras. The Folklore and Historic Museum of Rethymnon, whose displays feature embroidery, traditional costumes, metal work, and other examples of folk arts and crafts, is in a gorgeously restored Venetian Villa. 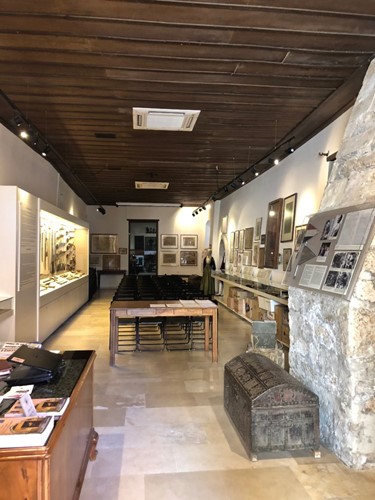 The charm of Rethymnon lies in the fact that authentic traditional culture thrives. The city looks like a museum, and the scents and sounds of the past drift from windows and picturesque courtyards. But these are the scents and sounds of today. For a sweet taste of tradition, visit a Venetian mansion turned workshop, where the revered phyllo master Kyr Giorgos Hatziparaschos makes both the whisper-thin pastry and fluffy shredded kataifi doughs. You’ll find him at 30, Manouil Vernardou. 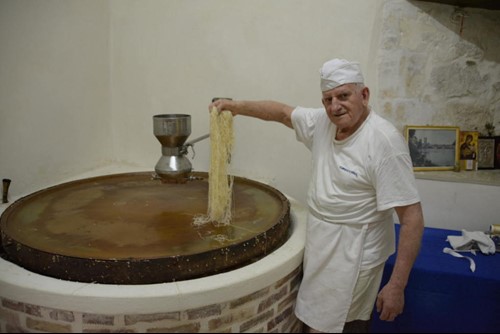 At third generation Patisserie Mona Lisa Skartsilakis, 36 Konstantinou Paleologou, the recipes are from the 1950’s, and the milk is from local sheep. For true artisanal souvenirs, visit the leather workshop Karras, 46 Varda Karalgis. For ceramics, Himarias street has two interesting destinations- ceramicist Frosso Bora has her atelier at number 25, and Artifacts by Omodamus at number 6. For something more modern, Greek Unique at 3 Vosporou has souvenirs with a contemporary sensibility. Feel Silver sells innovative and traditional jewelry designs near the Raimondi Fountain. Also near the Raimondi Fountain on Chimaras is the Olive Wood Corner, for traditional quality objects of olive wood, musical instruments, and toys and games (Summer is not Summer without the sound of backgammon in a café!)

Time to relax with a coffee? Do it in style —  Rethymnon is full of traditional coffee houses and unique contemporary venues. The cleverly named Bankery at 2 Dimitraki by the public garden has a tempting array of sweets and snacks. Living Room at 5 Eleftheriou Venizelou offers a sea view, great music, and plenty of ambience with its exposed stone walls. The sweet Kimolia, 11 Markri Christou on 25th March square, will charm you with its homey décor and good homemade cakes. 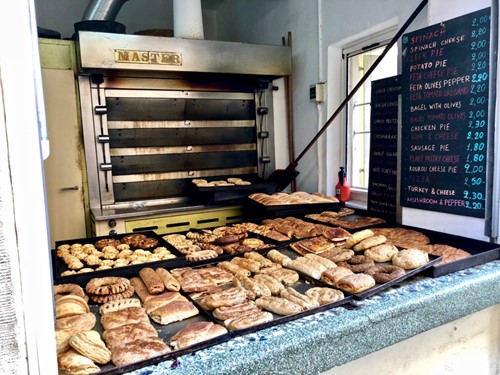 The way Rethymnon unites historic character with modernity is not just good fortune, but civic policy the past years. Rethymnon is devoted to sustainability- a member, for instance, of Civitas Destinations– a network of cities devoted to sustainable urban lifestyle. Rethymno, focusing on tourism and sustainability, will demonstrate sustainable and reliable mobility solutions that are environmental friendly with an aim to reduce the car usage by offering innovative services to residents and visitors. Rethymno has already got a cycling network of 20km, while the network in the prefecture includes 22 routes and 12 of them connect Rethymno with key attractions nearby.

In the direction of sustainable mobility, Rethymno has recently launched dockless bike sharing services. The resident as well as the visitor has the opportunity to rent a bike for the urban transfers all over the year, both affordable and sustainable.

It’s also a city devoted to the civilized pleasures of life. A member of Recevin, a European network of wine cities, it was the designated wine city of Europe in 2018. The municipality is also devoted to culture.

We hope that you enjoy discovering all the charms of Rethymnon town. Have you been to Rethymnon? Let us know what you liked best!