The Cretan Diet has been established to be one of the healthiest diets in the world. The vitality and longevity of the Cretans themselves is ample evidence in itself. But, in fact, a famous scientific study of the 1950s called the "Seven Country Study" confirmed the benefits of the Cretan Diet.

The Seven County Study was a long term study of the diets and lifestyles of test groups in Japan, Finland, the United States, former Yugoslavia, the Netherlands, Italy, and Greece - specifically Crete. At the study's conclusion, after nearly 30 years, many of the participants worldwide had died. But in Crete, many of the original subjects were still going strong. In fact, the study concluded that the Cretan participants had both the lowest incidence of mortality from coronary heart disease, cancer, and dementia and the highest life expectancy overall. 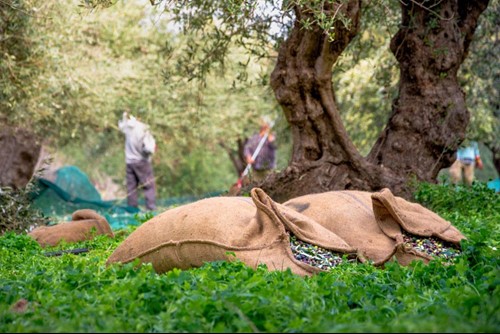 But, as any visitor to Crete knows, these properties - however impressive they maybe - are not the secret to the appeal of the cuisine of Crete. The Cretan Diet nourishes the senses and spirit every it as much as it benefits physical health.

What are the factors that make the Cretan Diet so beneficial?

The Cretan diet is based on elemental natural foods, locally sourced, and enjoyed seasonally. Meats are often from leaner and healthier goat and they are eaten in moderation. Greens and fresh vegetables are part of each meal, as well as cheese, produced from goat or sheep milk. There is ample excellent fish from the pure Cretan seas. Whole grains are an integral part of the diet, and legumes are also frequently on the table. 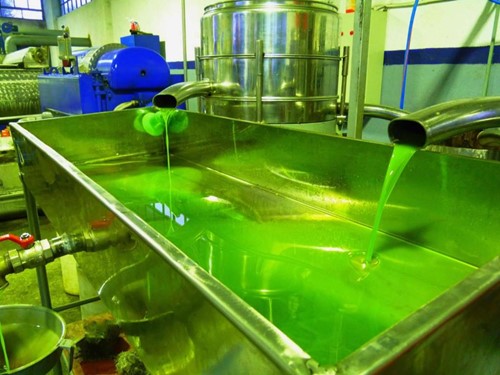 One of the primary factors that make the Cretan Diet a source of such lasting health is olive oil. Olive oil is famously rich in omega-3 fatty acids, antioxidants, and anti-inflammatories. Additionally, it has antibacterial properties. The benefits of olive oil are many. Studies indicate that it can be effective in reducing the risk of Alzheimers, certain cancers, type-2 diabetes, rheumatoid arthritis, and heart disease. Moreover, it is not associated with obesity (as the fine figures of the Cretans of any age attest)

Olive oil is the very cornerstone of the Cretan Diet. It is used liberally on salads, over grilled seafood, and even for frying.

Olive oil stars are the luscious cooked vegetable dishes of Crete. Bathed in fresh tomato and liberal amounts of oil, the tender local vegetables such as string beans, aubergines, and courgettes, are even called "Ladera" - "ladi" being the Greek word for oil. 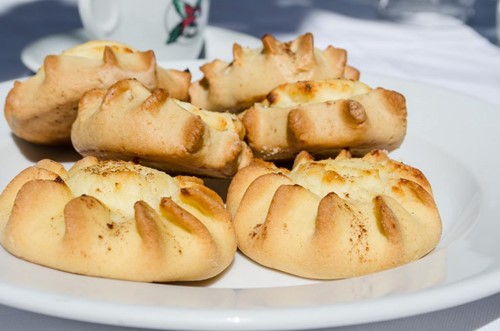 These delicious little pies - shaped like a half-moon or as little envelopes - are filled with fresh mizithra cheese and fried until crisp and delicate in olive oil. They are served drizzled with honey, either as a dessert or also commonly as a meze.

High in fatty acids and delicious, freshly caught fish form the base of many excellent Cretan meals.

Dishes from the sea:

If you get a chance to try a Cretan fish soup - "Kakavia" - you must. The best of the catch is simmered in a flavorful broth with carrots, onions, and potatoes, plus a handful of rice for texture. The fish is either served alongside with some oil or carefully cleaned of its bones and placed back into the soup. 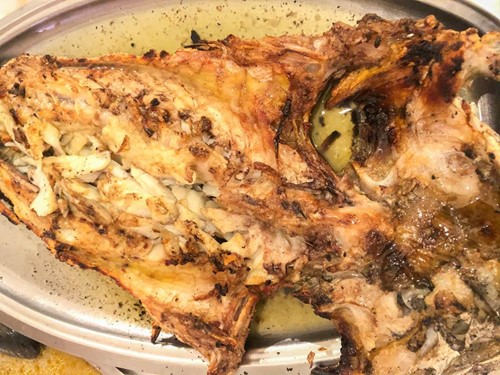 The star of a festive Cretan table is often a sizeable fresh fish, grilled to perfection, and served with "ladolemono" - a dressing of olive oil and lemon with salt and minced parsley. 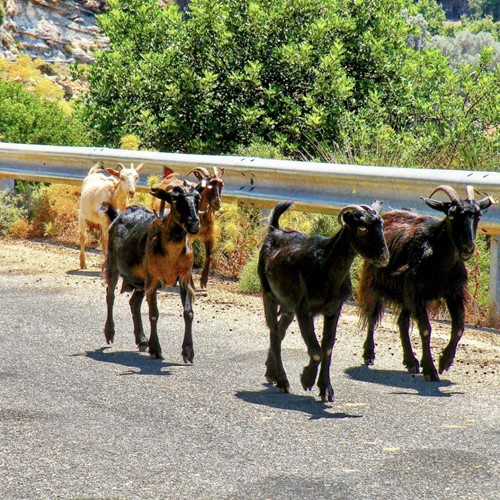 Everywhere you go in Crete, you will see goats roaming the landscape. Raised in the fresh air, grazing on wild herbs, their meat is both more delicious and more healthful than industrially raised meat. 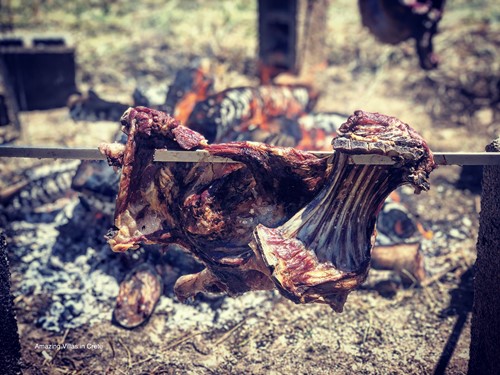 This peculiarly named dish is in fact goat or lamb roast across ("anti") from the coals over the course of hours until it gets mahogany and crisp on the outside, and juicy and tender within. 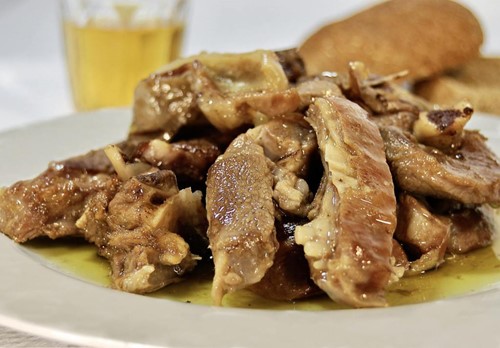 Do not be deceived by the humble appearance of this heavenly dish. Small pieces of goat or lamb are slow-cooked in olive oil for a very long time until melting and savoury.

Two of Crete's most popular dishes are "gamopilafo" (rice) and "sizouma" (spaghetti), which are both boiled in the broth of goat's or ewe's meat. The ideal meat for the above is to choose meat from a one-year-old animal, that has not yet given birth, the so-called "zigouri". These two delicious dishes are traditionally served in weddings and formal occasions in Crete. 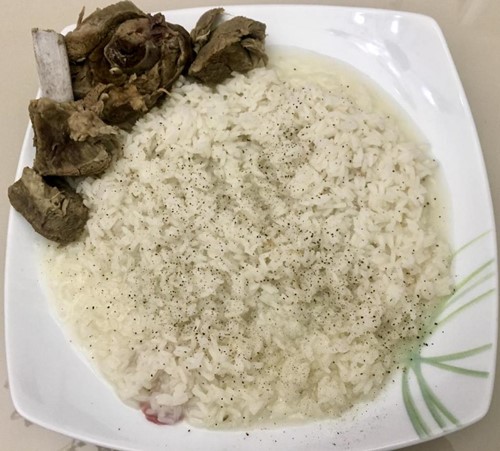 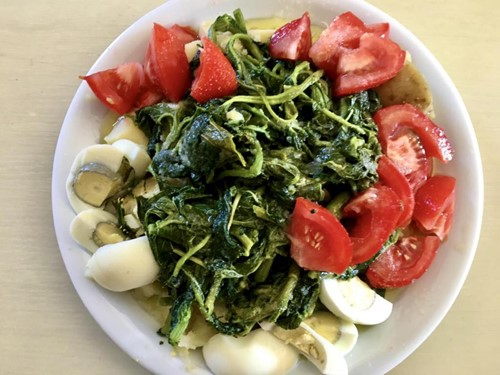 Cretans eat seasonally, celebrating the best of each season in special dishes to be enjoyed when their star ingredients are at their peak.

Perhaps the most famous of Crete's vegetarian dishes is luscious boureki. Delicate courgette slices are layered alternatingly with thinly sliced potatoes and soft, fresh mizithra cheese, fresh tomatoes, and fresh mint. The whole is then baled in the oven and served warm or at room temperature in squares. 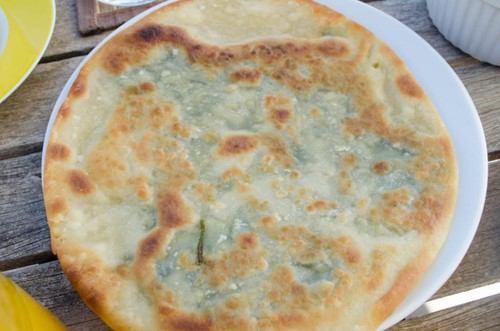 Wild-forged "maratho" - or fennel - forms the filling for these fragrant these pies, fried in olive oil until blistering, or even cooked in a dry skillet for a light and delicious treat. 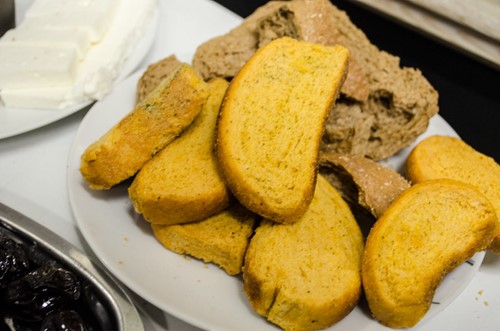 There is excellent bread in Crete, often baked in wood ovens. But the true staple of Crete is not bread from white, refined flour, but rather rusks. Crete's rusks, called "paximadia" are often made from whole grain barley and rye rather than wheat. 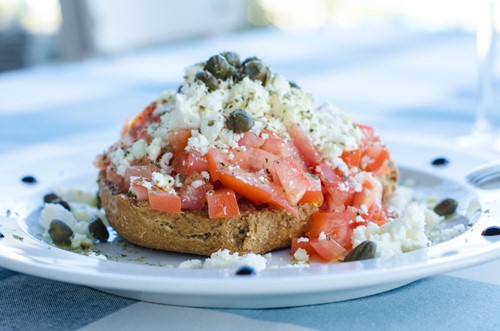 This most popular meze is made of barley rusks moistened briefly and topped with vibrant red fresh tomatoes grated and seasoned with wild dried oregano sea salt, and olive oil, then some soft, fresh mizithra. 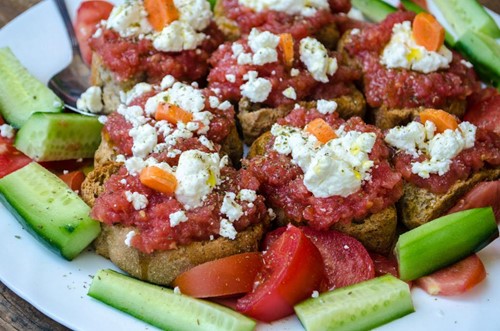 The Cretan version of the Greek Salad or "horiatiko" had broken rusks tossed in to soak up the juices of tomato and olive oil. The Cretan salad also often has the addition of capers and purslane, in addition to the classic tomato, cucumber, oregano and olive oil. 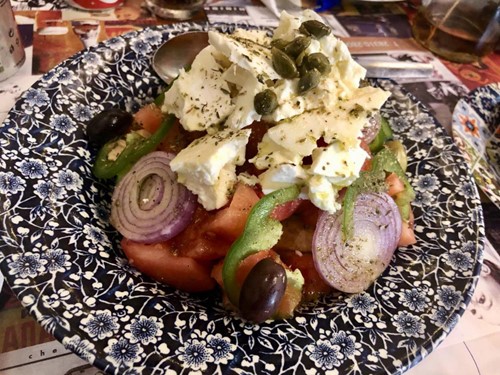 Greens form an important part of the Cretan table. On mountainous Crete, many times they are local wild varieties. Another Cretan treat for the bold is the humble, noble snail!

Full of personality and verve, these slightly bitter, slightly peppery small greens are served either raw or boiled, with lemon and extra-virgin olive oil for a delicious and healthful salad. A bowl of stamnagathi is ideal alongside a grilled fresh fish. 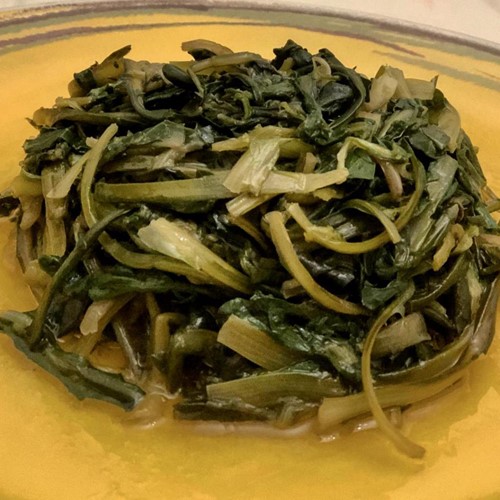 What's magical about the Cretan diet is the combination of ingredients that the Cretan land offers generously. For example, the boiled goat served with stamnagathi. 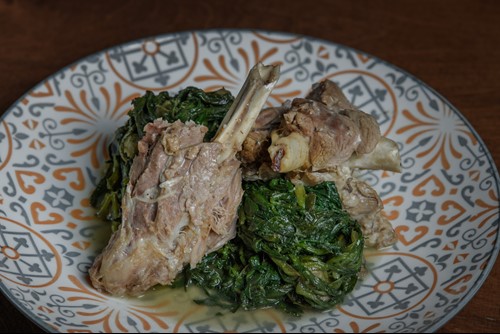 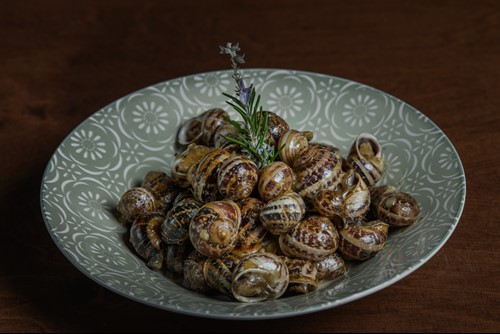 Escargot lovers beware - your favourite preparation has some lovely competition. Delicious wild-forged snails are tossed in flour to coat them before being fried in olive oil with fragrant fresh rosemary and then doused with a tag of vinegar. Simply delicious.

Cretans have a warm relationship with alcohol. Alcohol in moderation can be a welcome part of a healthy diet, and the Cretans have perfected it. Two drinks grace the Cretan table, both as pure as the landscape they flow from. 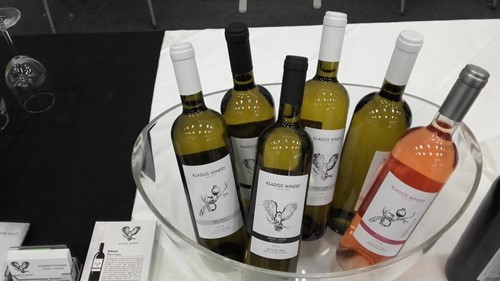 Cretan wine is often made from indigenous, ancient grape varieties, truly a taste of the ancient past. These varieties are well-suited to the Cretan soil and rugged hilly landscape, truly an expression of Crete itself. Do not be put off by wine in plastic bottles- this can be excellent, especially marouvas, aged in barrels and taking on a rich note of sherry. 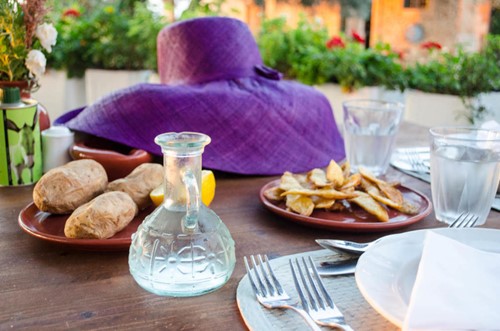 Also called Raki, this is the distilled spirit of the grape marc leftover from the winemaking process. Usually distilled in small batches, it is a pure spirit full of character, the essence of the land and the grape. This single distilled spirit is gentler than mainland Greece's Tsipouro. Also, it differs from Tsipouro in that in Crete it is always served without anis or other flavourings, letting the pure fragrance of grape shine on its own. Tsikoudia is an excellent accompaniment to a table of Cretan meze.

Vilana: The island's white star, Vilana, makes an appearance in the PDO Peza or Sitia wines with its fascinating fine aroma, its light taste and its refreshing lemon-scented acidity.

Thrapsathiri: A variety grown everywhere in Crete, offering balanced wines, rich in flavour. This is where the white PDO Sitia wines draw their particular taste from.

Liatiko: Excellent red variety which may be lacking in colour, but offers unique sweetness and character. The mind-blowing sweet and dry PDO Sitia and Dafnes wines are indisputable proof.

Muscat of Spina: This clone of Muscat is a small-grape treasure. In fact, its thin skin skyrockets the fine character of the dry wines it offers.

Plyto: Yet another variety recently saved from extinction, Plyto completes the mosaic of Cretan aromas and tastes with its refreshing acidity, its lemon scent and its lightness.

Mantilari: Wild and untamed like the Cretan land and its people, Mantilari is considered to be the king of native red varieties. This is where the PDO (Protected Designation of Origin) Peza and Archanes wines draw their strength from.